Emerald Ash Borer is an invasive insect that has already killed millions of ash trees in the United States. The insect was first found in 2002 near Detroit and quickly spread throughout Michigan and surrounding states where it devastated ash populations. Emerald Ash Borer (Agrilus planipennis) is a native of Asia, and entomologists think the bug was introduced into this country on ash components of packing crates.

The insect is a strong flier and has been spreading steadily to the surrounding states. In 2012, we thought the borer was no closer than Kansas City but unfortunately we were mistaken. In September of 2013 Emerald Ash Borer was found in Boulder, Colorado by the city forestry staff.

The adult beetle is about a half inch long and narrow. It has a flat head and gets its name from its metallic green color.

The Emerald Ash Borer adults emerge from infested trees in the spring and feed on ash leaves and then mate. About two weeks after they emerge, the females begin laying eggs into crevasses in the bark of ash trees. The eggs hatch in one to two weeks, and the small larvae chew through the corky bark and start feeding in the nutrient rich inner bark or phloem. Trees make their food in the leaves during photosynthesis and then distribute the food through the phloem to nourish the rest of the tree. The Emerald Ash Borer larvae destroy the phloem, which stops the movement of tree food and effectively starves the tree to death.

Can Our Trees Be Saved?

Trees can be treated with systemic insecticides either though trunk injection or soil application. The treatment must be done preventively because once symptoms appear, it’s probably too late to save the tree. Another borer from the same genus (Agrilus) attacks birch trees in Colorado, and we have a long history of successfully saving birches. We recommend treatment now for any ash you wish to save. Give us a call for help deciding which trees are worth saving. 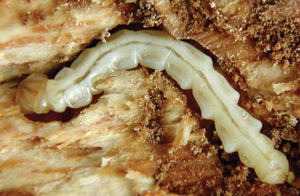 How Does The Infestation Spread?

While the insect is a strong flier, it usually flies no more than half a mile before it attacks new trees. The real problem is when the insect hitchhikes on firewood or logs moved by people. Shipments of ash nursery stock and ash logs or firewood are now strictly regulated, and it is illegal to move ash wood outside quarantined areas.

Please do not move any ash firewood or logs outside the county!

Call Us With Questions