Everybody’s concerned about the Emerald Ash Borer killing ash trees and with good reason. If you have a specimen ash tree in your yard and it dies, it’s a big loss. Those valuable trees should be treated right away. 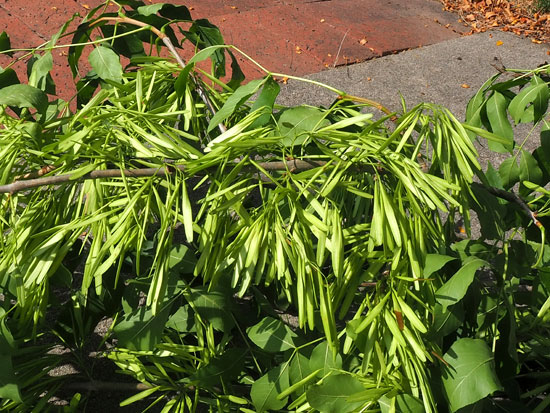 Hundreds of ash seeds on just one limb

Ecologists are worried about other invasive plants in the riparian areas, but nobody talks about the invasive ash trees. Yes, Russian Olive trees can be a huge problem, but in my opinion the green ash invasion will be worse. Some believe that crack willows are a problem, but I think that problem is overstated. (I’m biased. I like willows – check out my page “The Willows of Colorado”). The massive distribution of green ash seeds will lead to problems worse than either olives or willows.

Hundreds of ash seeds on the ground

One year I did a (very) informal survey and estimated that there were, on average, a hundred ash seeds per square meter in the entire City of Boulder. Wow! That’s a lot of weed trees. Yes, when they mature, the Emerald Ash Borer will kill some of them, but not until they become large trees. They’ll still be a huge problem in your yard and in the open space areas.

I believe that the number one concern of people removing invasive trees should be female green ash trees. Forget about Russian Olive and Crack Willow for a little while. Don’t worry about the male ash trees – they don’t have seeds. In the mountain parks, along the creeks, in Sawhill and Walden Ponds, and in the open space areas, get rid of the female ash trees now before they can spread thousands of more seeds and crowd out thousands more native plants.

If you have a female green ash in your yard, one that has seeds, and you don’t really love it – consider removing it. You’d be doing all your neighbors a big favor. People are spending their weekends on their hands and knees pulling baby ash trees out of their lawns and gardens.